What is important news and what is not?

The importance placed by the news media on some news items in preference to others is, in my estimation, a disgrace.

Today, the Otago Daily Times , a major New Zealand daily newspaper, featured as its front page lead story a news item about the Accident Compensation Commission (ACC) toughening up on its checking of  long term claimants' continued eligibility to receive benefits. The support stories on the front page were about a local winemaker being nominated for an international award and the possibility that some ornamental trees in the Dunedin CBD may have fallen victim to a fatal fungal disease.

Meanwhile, news of an Ethiopian airliner crashing into the Mediterranean with 90 people on board was deemed important enough to warrant only a brief mention at the foot of page 6, which is the world news page.

Is the loss of 90 human lives not more important than a possible tree disease, a nomination for a winemaking award or an insurer's claim verification practices?
Posted by Bricky at 17:26 No comments:

55% of Australians prefer a God-guided or biblical account of the development of human beings over Darwinian evolution, an Australian science communication researcher was reported in The Otago Daily Times as saying. Now, I lived and worked in Australia for 12 years and I didn't see any evidence that our Aussie friends are a particularly god-fearing bunch, so I can only conclude that the survey was conducted outside the Waggawagga Methodist Church at 11am on a Sunday or that the majority of respondents thought that "Darwinian" referred to residency in the Northern Territory's capital city.

As a Kiwi writing about Australians, I favour the latter explanation, but lest any Americans who might happen upon this post should be feeling smug, the same report says that only 40% of Americans believe the Darwinian account of evolution.

Okay, okay, New Zealanders are not all that rational either. According to a Massey University survey, 39% of Kiwi adults believe fortune-tellers can predict the future. There is no mention, however, of fortune-tellers setting up their tents at racetracks alongside the bookies. Apparently their entrepeneurial skills don't match their fortune-telling expertise.

If the surveys are accurate, my greatest worry is that one day I might have to face trial by a jury of New Zealanders (or Australians or Americans) with my defence depending their ability to digest scientific evidence!
Posted by Bricky at 11:16 1 comment:

...and still the bee doth toil 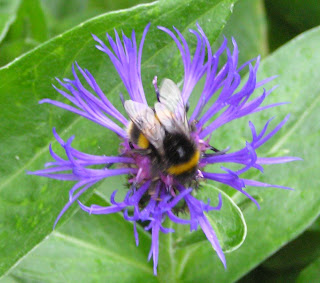 Late evening in my garden.
The wind doth blow, the rain doth fall, and still the bee doth toil.
Posted by Bricky at 19:45 2 comments:

Today is officially recognised as a Public Holiday in New Zealand. In this particular year, it doesn't matter much to most folk, because it falls on a weekend anyway. But it does matter to those whose job requires them to work, because the law of the land requires their employers to pay them at one-and-a-half times the usual hourly rate and also requires that they are allowed a day off in lieu at some later date. It matters to employers for the same reason.

I wonder how many countries have a public holiday on January 2, simply because it happens to be the day after the first day of the year. It doesn't happen across the ditch in Australia and I don't imagine it happens in too many other countries.

There are other public holidays which seem superfluous as well (although I have no problem with my employer being required to pay me for staying home). The Queen's Birthday holiday is celebrated on the nearest Monday to June 4, because June 4 was the birthday of one of QE2's uncles or great uncles (I think). Does anyone really care a toss, or consider it a significant date?

I would wager that most New Zealanders have no idea that October's Labour Day commemorates the introduction, at some time in the country's obscure past, of a universal eight hour working day (which, incidentally, hasn't been recognised for God knows how many years, either in law or common practice). My understanding is that in earlier days, working folk and their families flocked to communal picnics, organised by respective trade unions, on this holiday, but not many people living today would even remember that.

The founding of each respective New Zealand province is celebrated by a day off work for those in each province on a date unique to their place of domicile and is called Anniversary Day. Never mind that provincial government was abolished in this country more than a hundred years ago and there is no longer any clear definition of geographical provincial boundaries. In my "province" (Otago), Anniversary Day falls in April, so many employers, schools, etc tack it onto Easter weekend, making the officially designated date a curious phenomenon when some institutions are closed and some are not (likewise the Tuesday following Easter Monday).

And then there's Waitangi Day, which is just too complex and controversial to even try to explain!

My solution, which, sadly, is not going to happen because the present system of public holidays is firmly entrenched in Kiwi culture, is to abolish all of the aforementioned holidays, give every employee an extra week's annual leave to be taken at a time of their choice and add a week to school, college and university holidays. Business operators would be in favour as short weeks are not conducive to good business.
Posted by Anonymous at 17:31 2 comments:


A very clever post "Doug versus Dog" on Doug Green's Blog reminded me of this amusing pub sign photographed in Fife, Scotland a few years ago. I'm told the name translates to "the drunken dog".
Posted by Anonymous at 22:06 No comments: