How quickly are we changing our ways?

While gardening this morning, I dug up an old plastic supermarket bag. How do I know it's old? Certainly not by the condition of the plastic. A wipe with a damp cloth and it was as good as the day it was carried from the checkout to the car. I know it's considerably more than ten years old because it was buried in an area of my property that hasn't been disturbed in the ten years since I acquired it. In fact, when I moved to this place, it was apparent from the overgrowth that the area hadn't been disturbed for many a year before that.

Now, gardening always sets me to thinking. That's part of why I find it therapeutic. But this subterranean find gave me something to think about. Have a look at the proud claim made by the chest-beating grocery chain of the day: 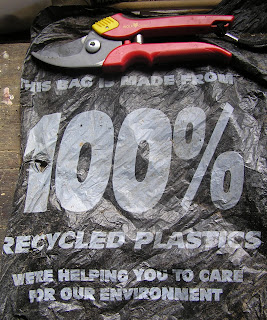 On the positive side, some (former?) perpetrators of eco-vandalism have progressed from a world where credit could be claimed for saving resources and providing a use for previously used materials, to a world where some of them provide disincentives to the use of environmentally harmful materials - e.g. charging for plastic bags. But on the negative side, it's slow progress indeed. The other point worth considering is the seemingly indestructible nature of the material. If it's still in perfect condition after 10-20 years in the soil, how many generations is it going to be before it disappears - if ever?
Posted by Bricky at 12:58 2 comments:

Political scientist I'm not, but I don't believe the present government is as popular as recent polling would have us believe. That's not to say the polling's wrong. Confused? You're not Robinson Crusoe. Seems to me the electorate is confused, hence the polls being as they are.

From what I'm seeing and hearing, the present National government is not particularly popular. In fact, there is significant disquiet and dissatisfaction about much of what is happening and what has and hasn't happened over the last two and three quarter years. I also think there is growing discontent with John Key as PM. So why are the polls telling us differently? Because right now, a majority of New Zealanders don't see a viable alternative. Firstly, a great many people who were not natural National voters gave their support to National and it's too soon for them to admit to themselves that they were wrong. Secondly, it's too soon for Labour to have any credibility in their criticism of things they could have - and didn't - fix while they had the opportunity. Thirdly, and most importantly, they have no X factor.

If an opposition party approaches an election when the incumbent party has been in government for two or three terms, they may not need an "X factor", because there is a natural tendency for people to become tired of the same old government and yearn for a change. So what is an X factor? Simply, something that excites, and despite having come up with a viable alternative to National's unpopular asset sales strategy, they haven't excited anyone. So it comes down to personalities (or more correctly, a personality). Personally, I see Phil Goff as intelligent, sound, pleasant, and eloquent and I would be quite happy to have him as a PM. But that isn't going to get Labour across the line, and to be honest it isn't even going to get them into the stadium. They need a strong personality who'll capture the public imagination. A Norm Kirk. A David Lange. A Robert Muldoon (God forbid!).

It seems me that Phil Goff has seen the perceived success of John Key and tried to emulate his relaxed, blokey style, instead of setting himself apart and showing a bit of mongrel. Maybe that just isn't his style, but if he can't make himself a point of difference (read X factor), then despite his qualities he should go. Probably too late to change before the election, but then I suspect that after another term of National government, an X factor may not be needed.
Posted by Bricky at 14:44 No comments:

It's not that I'm a gambling wowser. Neither is it that I'm agin sport. In fact, I've made quite a number of funding applications to gaming machine trusts on behalf of sports organisations over the years, some successfully, some not. But I do recognise that gambling is addictive and it causes a great deal of misery for many, many more people than the addicts themselves. Thus there is a legitimate argument against poker machines in that they are instruments of gambling and as such they generate hardship to significant numbers of people. They are also a form of gambling that research indicates is more addiction-forming than others.

When poker machines were made legal in New Zealand, it was a condition that they could be owned only by trusts which, by law, had to distribute the profits to recreational and community organisations like schools, sports clubs, cultural groups and the like. At a time when changing work practices were allowing Kiwis less and less leisure time to devote to selling raffle tickets, sheep manure and cheese rolls, the distribution of pokie profits came as a godsend and in the years since, the only fundraiser in many voluntary organisations is the person who submits the applications for funding.

So we have a conundrum. Without pokie machine funding, grassroots sports, cultural and other organisations are unable to function in today's world. With pokie machines, large numbers of people  (about one person in every eight of Dunedin's population, according to Chris Watkins of the Salvation Army's Oasis Centre for problem gambling) are being adversely affected. Rather than take the moral high ground and denounce the existence of pokies and those whose interests depend on them, Mr Watkins and Mr Jerry Banse, a social worker with a Maori social services provider, have invited representatives of 670 organisations which have benefited from gaming machine funding to a forum for discussing the issue and exploring alternative funding options. Seems like a reasonable move to me. But not to the leaders of the two "sports" that have benefited most, by far, from pokie profits in recent years.

Dunedin community newspaper "The Star" this week reported Otago Rugby Football Union manager Richard Reid and Otago Racing Club chief executive Andre Klein as saying they were unsure whether anyone from their organisations would attend the forum. Applying for pokie-funded grants did not present an ethical dilemma, they said.
Mr Reid: "The law is what it is. It doesn't create an ethical dilemma for me personally or for the rugby union - and I'm not sure why it should."
Mr Klein: "Help should be available for those with an addiction. The fact that what is a harmless leisure activity for most, such as playing a pokie machine, can generate so much funding for the good of the community, should be viewed as nothing but a positive."
In the past year, each of the aforementioned organisations received more than $140,000 of pokie money.

This in a week when Dunedin's food banks are crying out for donations to replenish shelves made empty, at least in part, by the needs of people disadvantaged as a result of gambling addiction. All you're being asked to do, Mr Reid and Mr Klein, is to send someone along to discuss the issue and see if there isn't a less painful alternative. Do you really need to be that insensitive? 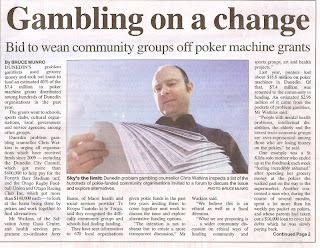 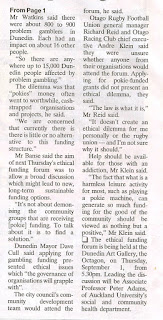