Boy, am I getting fed up to the back teeth by the news media's fixation with Tiger Woods's private life. I cannot see one good reason for any person on this Earth, other than those individuals directly affected, to have any interest in what this person does (or has done) anywhere except between the first tee and the eighteenth hole of a golf course.

Media folk would argue that there is huge public interest and that they are simply catering to that interest. My view is that there is huge public interest only because the news media generated it in their own pecuniary interest. Unfortunately that says as much about the intellect of the media's audience as it says about the media's greed.
Posted by Bricky at 12:30 No comments:

For years, I avoided doing anything about a difficult little dry strip on the east side of the house. It was under the eaves, a long way from a hose-tap and the very ordinary soil was littered with builders' rubble. Then in early Spring a few wildflower seeds came my way, so I lightly forked the area over and threw them in. Now I'm thinking it was well worth the twenty minutes' effort I put in. 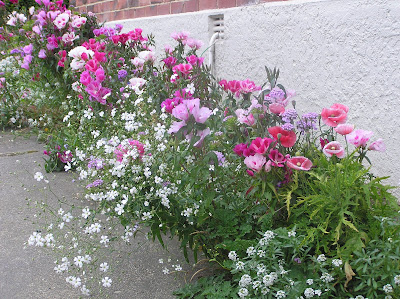 Wildlife in the bathroom

Look what greeted us in the bathroom this morning! 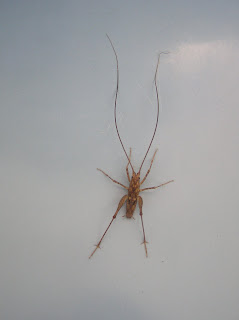 I think it's one of New Zealand's 70 something species of native weta which apparently made its entry overnight through a partly open window. I really would like to think its appearance is due to my "no spray" regime in the garden over the past three years and that this is evidence of my garden becoming home to an ever increasing amount of insect life. Alas, I fear that is not the truth of the matter (although I'm sure the insect population is increasing). I think this handsome visitor probably hitched a ride on a trailerload of firewood that my neighbour brought in from a forest in the country and parked in his driveway overnight. It has been released gently and lovingly amongst some rhododendrons. Perhaps it is bearing eggs and will populate the garden with its progeny!
For the record, the body is about one and a half centimetres (three quarters of an inch) long - a mere miniature compared with some of the giant species in the New Zealand bush.
Posted by Bricky at 18:06 No comments: