DIY as it once was

To say my father was the ultimate DIYer is a bold statement, but he was a standout even in an era when neccessity dictated that almost everyone was a DIYer to some extent. And he wouldn't have had a clue what DIY meant - he just did it himself if there was any possible way he could. Buying was a last resort. There simply wasn't the money available in most instances so if he couldn't make it (or do it) himself, we as a family had to go without in most cases. But we did have the neccessities. We even moved into a brand new house when I was about 12 years old. My father had borrowed money to buy a low-lying, swampy residential block of land about 15 years previously. 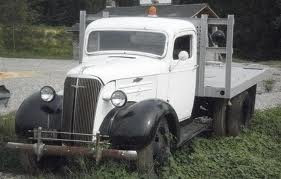 He raised the level by laboriously carting in topsoil that he obtained from the side of a country road where a grader had done some widening work. He shovelled it onto his 1937 Chevrolet 2 ton flat-deck truck (similar to the one pictured), carted it home and shovelled it off - all 300 loads - in the weekends and on evenings after work. It took him years. 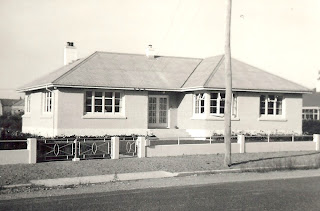 He then made hundreds of cement blocks from gravel and sand he shovelled and carted home out of a nearby riverbed. He designed and built the mold he made them in. He designed and built the house and fitted it out with joinery of his own making. The only tradesman he engaged was the electrician who did the wiring, because the law didn't allow him to do it himself. He even did his own plumbing and drainage, having convinced a registered plumber to inspect and sign off his work.

Building the house was only a part of his my father's DIY effort. He lived it every day of his life, feeding the family by buying live sheep from a farmer and butchering them himself to catching trout and salmon on homemade tackle and canning them. He was not a miserly man; he had simply learned to live and provide for his family on a shoestring because it was the only way he knew.

Yesterday my car needed a wash, so what did I do? I drove a 12km round trip to the petrol station, paid $14 for the privilege of waiting 35 minutes in a queue to have my car washed less perfectly than I could have done it myself at home for free. My dad just wouldn't have understood. I'm not sure that I do, either.
Posted by Bricky at 19:27 5 comments:

A Story With Two Morals

Like everyone, I receive recycled emails every day from well meaning acquaintances who feel a need to brighten up my life. Truth is, most of them are so inane, farcical or otherwise uninteresting that my acquaintances evidently think I have a sad life indeed. This one tickled my fancy, though, probably because of moral number 2.

It was the coldest winter ever. Many animals died because of the cold. The hedgehogs, realizing the situation, huddled together to keep warm. This way they covered and protected themselves, but the quills of each one wounded their closest companions. After a while, they decided to distance themselves one from the other and they began to die, alone and frozen. They had to make a choice: either accept the quills of their companions or die - become extinct as a species even. Wisely, they decided to go back to being together. They learned to live with the little wounds caused by the close relationship with their companions in order to receive the warmth that came from the others. This way they were able to survive.

Moral number one: The best relationship is not the one that brings together perfect people, but the relationship when each individual learns to live with the imperfections of others and can admire the other person's good qualities.

Moral number two: Learn to live with the pricks in your life.
Posted by Bricky at 12:36 1 comment:

New Zealand's present government doesn't often come up with an idea to gladden my instinctively left-leaning heart, but the recent proposal to require recipients of the unemployment benefit to be drug-free is an exception. Effectively there are only four prerequisites to receiving this benefit, commonly called the dole. Two relate to citizenship and residency, one to age and the other requirement is that "you must be available for, and looking for full time work".

In this country, employers have a legal responsibility to maintain a safe workplace. A workplace cannot be safe when it employs people under the influence of alcohol or drugs, therefore it is usual and responsible practice for employers to require a clear drug test prior to hiring a new employee. It is reportedly common in some industries for job applicants to be rejected because of their failure to pass such a test. In fact, I have seen clear evidence of this in my own experience. Not many years ago I found myself out of work and applied for one of a number of unskilled positions at a meat processing plant. Along with seven other applicants I was promised employment, conditional upon my attending a half day orientation programme including a drug test. Of the eight, only two of us passed the drug test and were subsequently hired. The other six made no secret of their relief at not having to forgo their unemployment benefit. Work & Income NZ requires unemployment beneficiaries to provide evidence that they are actively seeking paid employment. Many of them evidently set out to fail these tests in order to avoid losing their benefit entitlement.

New Zealand has a number of benefits available to those who need help for one legitimate reason or another, including sickness benefit and domestic purposes benefit. I don't advocate drug testing for recipients of those or any other benefits, because the unemployment benefit is the only one that is conditional upon the recipient being "available for, and looking for full time work". I fail to see how genuine jobseekers would not abstain from taking illicit drugs when they are well aware of those drugs rendering them unavailable for paid employment.

Mr Key and Mr English, much as it pains me to say so, I support you on this one, but only insofar as it applies to the unemployment (jobseeker) benefit. Having said that, I don't trust you not to use it as the thin edge of the wedge in extending the testing to recipients of other benefits.
Posted by Bricky at 19:34 No comments: