Dunedin's daily newspaper, The Otago Daily Times, will be gutted at April Fools' Day falling on the only non-publishing day of the week. For many years they have kept a tradition of running a fictional (but sometimes almost credible) front page story of local interest to feature on their 1st April front page. It's a bit of fun, but my failure to recall the detail of a solitary historical example might say something about their quality. Then again, it probably says even more about the recollection ability of my aging brain.

The April Fools' prank that comes most readily to my mind was perpetrated perhaps 12 or more years ago in this city. It duped more local citizens than any newspaper could ever have hoped to reach in such a short time.

Harbour Cone is a former volcano, thought to have been extinct for millions of years, which features prominently in views from most parts of Dunedin. 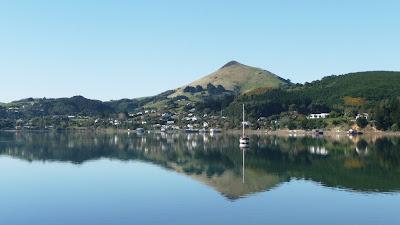 Before dawn on the day of which today is an anniversary, a person or persons unknown climbed to the summit, where they set and lit a large smoky fire just behind the peak, where the fire itself couldn't be seen.

Thousands of Dunedin citizens awoke to the unthinkable sight of their beloved Harbour Cone apparently awaking from its long sleep. Brilliant!
Posted by Bricky at 11:28